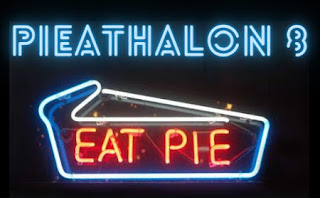 JUST when you thought life couldn't get any more exciting, along comes the highlight of the late Summer/early Autumn social calendar, Pieathalon! Pieathalon EIGHT if you can believe it. I am, as always, honored to be counted among the participants, especially considering my last post here was (*checks notes) Pieathalon SEVEN.  Thanks to my fellow food bloggers and especially Yinzerella at Dinner is Served 1972 for prompting me to get off my a** and make something for public consumption again.

Because apparently being stuck in the house for a year and a half with literally nothing else to do wasn't enough to get me motivated.
But enough about me, let's make a pie!
The excellent Jenny from Silver Screen Suppers sent me a recipe for "Ann Landers' Save Your Marriage Meat Pie." (Don't panic, my marriage doesn't need saving at the moment. THAT I KNOW OF.) 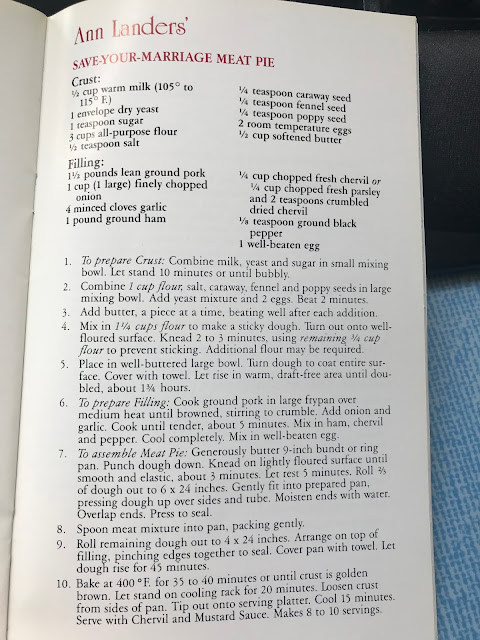 Being of a certain age, I remember a time when Ann Landers (née Esther Pauline "Eppie" Lederer) and her twin sister, Abigail Van Buren (née Pauline Esther "PoPo" Phillips), in their competing advice columns, dictated the social mores of middle America with their witty, no-nonsense advice. In my early formative years, I had the advantage of living in a home where we received TWO daily newspapers, and so I was doubly-indoctrinated into polite society. (Full disclosure: The morning paper, The Columbus Citizen-Journal, carried Dear Abby and also had a far superior comics' section, so if forced to choose sides I would have to lean towards PoPo). 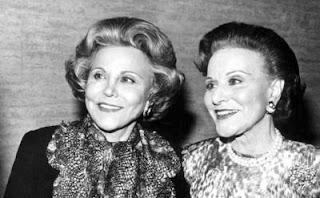 Ann Landers (left) and Abigail Van Buren
The recipe seemed a bit intimidating at first glance. I'm not much of a baker (I usually recruit Dr. Husband to make my crusts for these things) and the idea of trying to manipulate a crust into a bundt pan made me perspire. (In fairness, my only bundt pan is a pliable silicone thing that makes for easy cleanup but doesn't tend to hold the shape of whatever's in it very well.)
So, my crack Googling skills led me to the idea of little mini-muffin pies.
With my new goal in mind, I made the following modifications:
• I halved the recipe across the board (maybe a mistake – read on)
• I used ground turkey in place of pork – I live in the middle of nowhere and only ever see ground pork as part of a "meatloaf mix" and YES, I could have gone to the butcher and asked for some special order, but everyone is masked and also I don't like talking to people
• I did not use chervil - see above about the middle of nowhere and also I don't know what chervil is and YES, I could have Googled it, but I had already Googled that day and I am awfully lazy
The dough came together very easily and was not nearly as sticky as I was led to believe.
BUT.
The dough didn't seem to rise. AT ALL. Maybe something got mis-aligned in my halving of the amounts? I know the yeast activated before I mixed it in, and the dough retained a delicious buttery, yeasty aroma throughout, so ¯\_(ツ)_/¯ 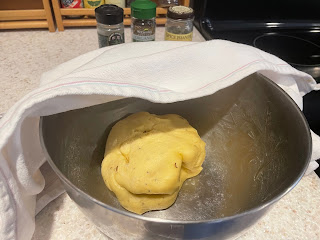 Likewise, the meat mixture was simple enough, my only regret being that I didn't have the Hamilton-Beach meat grinder that my mother received for Christmas, 1963. (Photo evidence below. If you can manage to keep your eyes from lingering on the fabulousness of the Christmas tree and the television.) 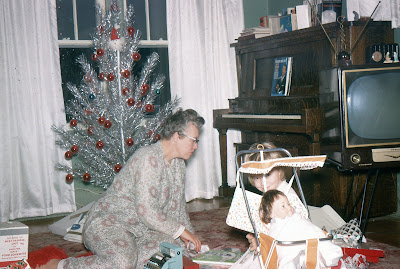 As far as I remember, my mother used the meat grinder EXCLUSIVELY to grind up leftover ham for ham salad, and it sat in her kitchen well into my adulthood, and though she's no longer with us I'm pretty sure it still exists, intact and operational, somewhere in my own home or one of my siblings'.
Un-risen dough now rested, I shaped it into a muffin tin with varying degrees of success. Not only did it not noticeably rise, but it retained a very springy texture. By the time I had finished shaping one slot, the dough in the previously-completed slot had pulled back from the edges and begun to pull into itself. It was a race against time. 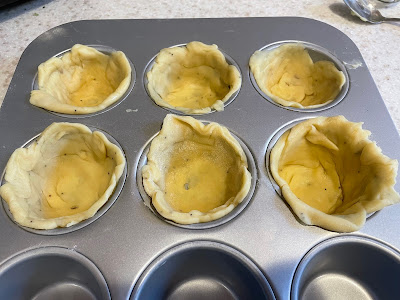 Once filled, I tried to get fancy with the remaining dough, again with varying degrees of success, as evidenced by the shot glass in the background. 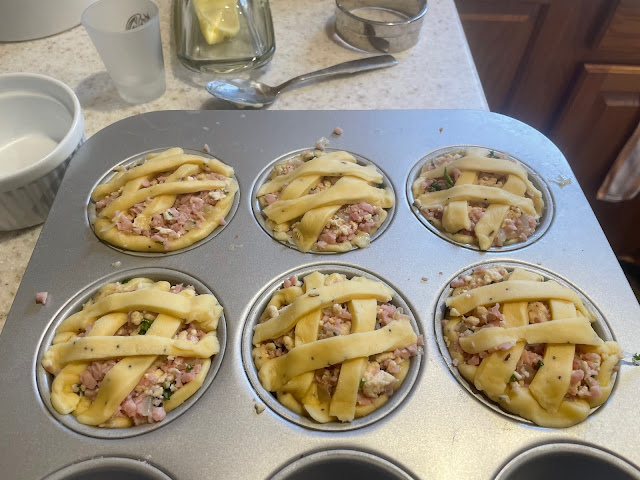 I baked at 400 for just shy of 20 minutes, maybe that was even a little too long as they probably got a little too brown on the bottom. 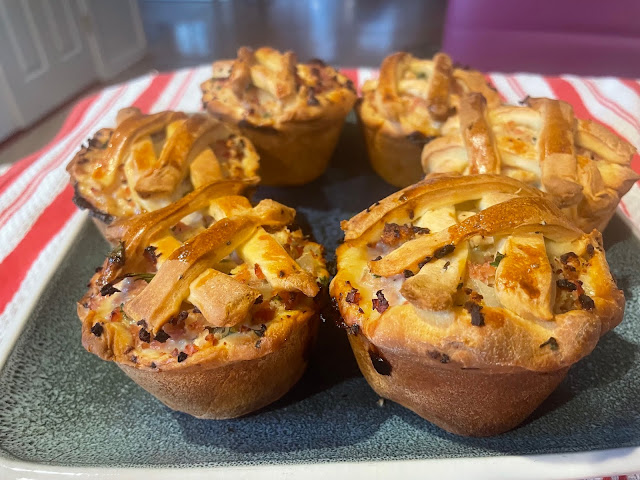 So how did they taste?
SPOILER ALERT my marriage is safe. FOR NOW
Check out my fellow Pieathletes' creations below, and stay tuned because KITSCHMAS IS COMING
Rum and Butterscotch Pie at Vintage Recipe Cards
Surprise Fudge Pie at Silver Screen Suppers
Tarte a l'Orange at Recipes for Rebels
Chocolate-Crusted Coffee Pie at Grannie Pantries
Osgood Pie at A Book of Cookrye
Tarte au Petite Suisse at The Nostalgic Cook
Ozark Pie at Retro Food for Modern Times
Dinner is Served 1972
ALSO: Did you know Dr. Husband and I have a podcast? And Dr. Husband even has another one all his own?

Watch me!  Then go to Silver Screen Suppers for the deets! 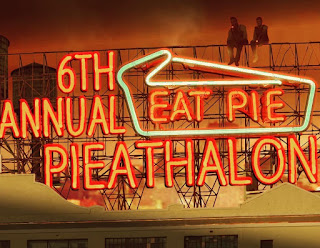 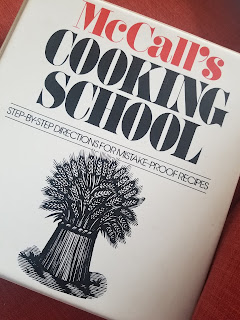 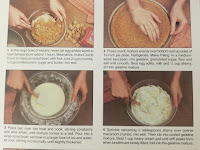 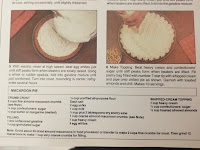 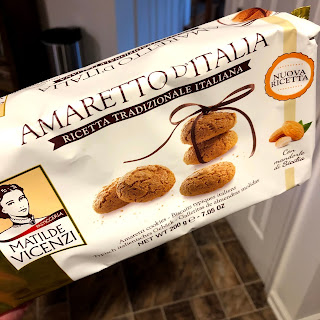 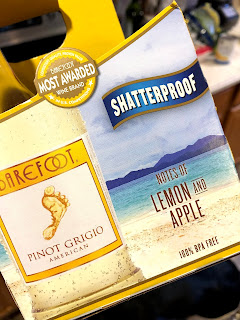 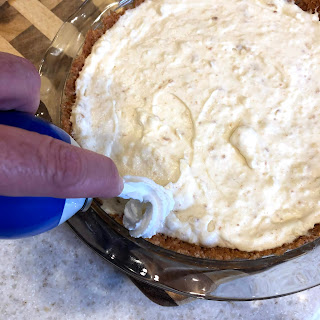 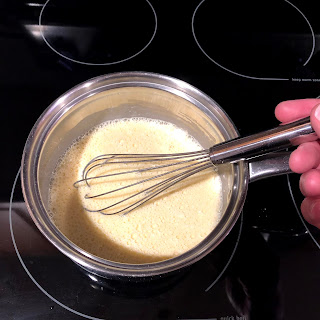 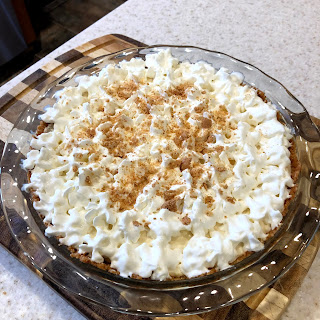 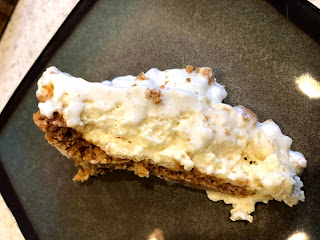 On The Twelfth Day Of Kitschmas My True Love Gave To Me...

...Yuletide Mold! Plus a song!

On The 'Leventh Day of Kitschmas My True Love Gave To Me...

On the Tenth Day of Kitschmas My True Love Gave To Me...