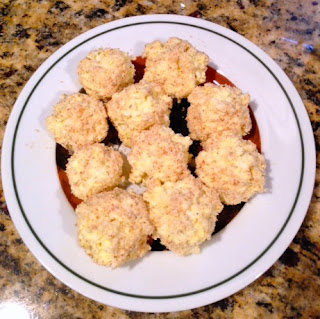 I'm sure there's a "which-came-first-the-chicken-or-the-egg" joke in here somewhere, but it's not coming to me.

As mentioned last time, a recent jaunt through Pilot Mountain, NC, snagged me a 1950 copy of "Charleston Receipts", still available in a recent edition on Amazon, if you're interested. With treats like the above, as well as "Mrs. Alston Pringle's Calf's Head Soup", "Hog's Head Cheese", and "Ham Paste", how could you resist?

As to the book's title, my crack Googling skills tell me that receipt and recipe both derive from the Latin recipere, "to receive or take". Receipt was first used in medieval English as a formula or prescription for a medicinal preparation (Chaucer is the first known user, in the Canterbury Tales of about 1386). The sense of “a written statement saying that money or goods have been received” only arrived at the beginning of the seventeenth century.

Recipe is the imperative, "take!", from the same Latin root. It was traditionally the first word in a prescription, heading the list of ingredients. This was often abbreviated to a letter R with a bar through the leg, the origin of the standard "Rx" abbreviation in pharmaceutical circles. Recipe has been used alongside receipt since the eighteenth century in the sense of cookery instructions, gradually replacing it over time.
It’s by no means entirely defunct even today. It was used on British television, up to the late 1990s, on  Two Fat Ladies, featuring Clarissa Dickson Wright and the late Jennifer Paterson, who invariably spoke of receipts. It is also said with regularity by my mother.
So, on to the Egg Balls.  I had a house full of company when I made them, and, being by now a minor regional celebrity, the prospect of Egg Balls being made caused quite a bit of excitement, as one would imagine, one guest even insisting on observing the creative process from start to finish.
The recipe:
4 eggs
1/2 pound butter
Salt and red pepper
Worcestershire sauce
Celery seed
Bread crumbs

Cream hard boiled eggs with butter. Season to taste with red pepper, Worcestershire sauce and celery seed. Make into balls, put in ice box to set, then roll in rich bread crumbs that have been browned in oven. Equal parts of mashed fish and a few pinches of chopped parsley may be added to creamed eggs and rolled in bread crumbs. Makes 16-18 balls.

A couple of disclaimers: I didn't have celery seed, so I used celery salt. I also used bread crumbs right out of the box, assuming that modern technology had eliminated the need to brown them myself.

I also opted out of the mashed fish suggestion.

What we thought: My guests, for some strange reason, were over the moon with this dish. (But they're young, they lack the life experience to discern a really fine canapé.) The Egg Balls were so popular, I'm not sure Husband even had a chance to try one. As for me, it's not something I could exactly complain about. They taste like egg on buttered toast, if you took the egg on buttered toast, rolled it into a ball, and stuck it in the freezer for 15 minutes. I suppose 1950's hostesses needed something familiar-tasting-yet-oddly-too-cold to serve to guests in the days before you could buy 1500 pinwheel sandwiches at Sam's Club.

Email ThisBlogThis!Share to TwitterShare to FacebookShare to Pinterest
Labels: Eggs