I'm assuming most of you live in America, and thus have been suffering under cruelly cold weather - I live in a nearly 200-year old house as well, which soaks up the cold and makes it frigid even on the off days that the thermometer is above freezing. So, I thought I'd bring a little summer into all of our lives, with this delight from the Joys of Jell-O cookbook circa 1963. A delicious, lovely salad that displays the bounty of the season, the book says. Because nothing says summer like rough-cut vegetables suspended in gelatin!

Summer Salad holds pride of place as the back cover illustration for 1963's Joys of Jell-O: 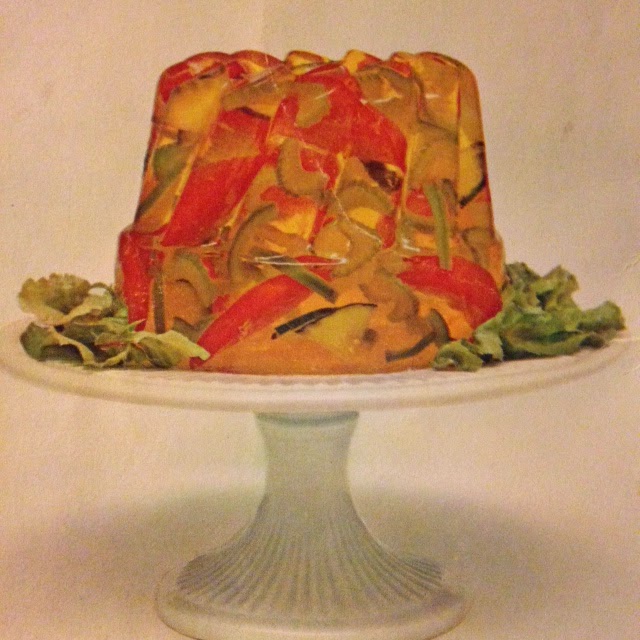 Based on that illustration alone, I didn't hold out much hope for this entry, never mind the version I ended up with on my own. But a wish gastronomic friend saw a preview of today's post and, unprompted, remarked "...it looks like fresh tomatoes, celery, green pepper, and cucumbers in a simple gelatin. If it is favored with a vinegar and garlic base, it could be quite wonderful." I'll be damned if he wasn't right.

Vinegar, yes, but no garlic - lemon Jell-O is the base, and we all know that's the key to success when adding vegetables or meat. Sour it up with vinegar and salt so the sweetness doesn't overpower, until such time as my humble efforts prompt a resurgence of Jell-O mania and they bring back celery and Italian dressing flavors. Here's the recipe:

Dissolve Jell-O Gelatin and salt in boiling water. Add cold water and vinegar. Chill until very thick. Fold in remaining ingredients. Pour into a 3-cup or 1-quart mold. Chill until firm. Unmold on crisp greens. Garnish with more tomato, if desired. Makes about 3 cups, or 6 side salads.
NOTE: If desired, substitute 1/2 cup sliced radishes for tomato or 1/2 cup chopped cauliflower for cucumber.

No substitutions here (and no oregano either, if you were keeping track). What did my discriminating guests think?