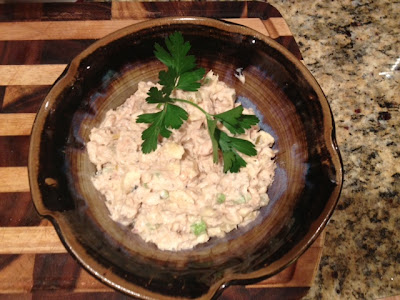 One of my recent eBay acquisitions was the delightful "500 Delicious Salad Recipes" published by the Culinary Arts Institute in 1951.  A wonderful compilation, valuable for its extensive instruction on home-made dressings alone, as well as an entertaining primer from the dawn of congealed salads and HOLY CRAP BANANA AND SALMON SALAD 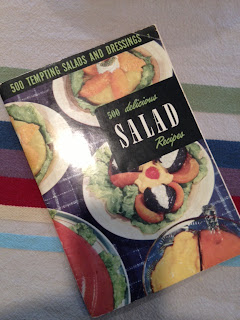 Being that the recipe was published in 1951, it's undoubtedly a nod to the craze for "Polynesian" foods that swept across middle class America from the late forties through early 70's.  (If the thought of Polynesian Restaurants and Tiki Lounges dotting the landscape doesn't make you nostalgically melancholic, then you're probably in the wrong place.)

We can largely credit Victor "Trader Vic" Bergeron and his chain of restaurants for igniting the craze, and satisfying the hunger for foreign-esque foods that our boys had brought back from the Pacific theatre of World War II.  The formula is simple:  take any savory substance, preferably a roasted meat of some kind, and add overwhelming amounts of a sickeningly sweet glop, like grape jelly, pineapple, or maraschino cherries. Or a combination of the three.  Add a banana for a little texture variation and, voila! you've got yourself a backyard luau!

(The rise and fall of Polynesian cookery is superbly chronicled by Jane and Michael Stern in their books The Encyclopedia of Bad Taste and American Gourmet, both sadly out of print but well worth tracking down.) 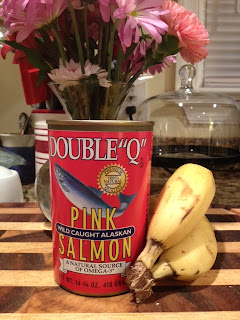 Mix bananas and pineapple together. Add flaked salmon. Fold in remaining ingredients. Garnish with crisp lettuce or other greens and lemon slices. Serves 8.

Let me state at the outset that canned salmon is a horrid thing. Unlike canned tuna, a can of salmon contains bits of skin and bone and is a messy reminder that what you're about to ingest actually came from nature.  So "flaking" (otherwise known as "meticulously picking through to ensure that you got all the tiny needle-thin bones out") is a necessity.  And the intoxicating smell of salmon being flaked is sure to attract an attentive audience. 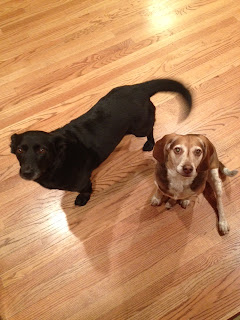 Also, there's a very fine line between "dicing" and "pulverizing" bananas.  Use a delicate touch, gals, and make sure that your bananas are not over-ripe!

I wasn't sure about the last two ingredients:  "chopped pickle"....was I meant to chop my own, or was there actually once a product called chopped pickle that one could buy?  Should I chop dill or sweet pickles?  Since another recipe in this book specified chopped dill pickle, I assumed sweet was what was wanted, so I just used garden-variety sweet pickle relish.

And mayonnaise to "moisten"...I used a heaping tablespoon, which from the resulting consistency of the dish may have been a bit too much, but if I've learned anything thus far, it's that mayonnaise never hurt anything.

What we thought: Not wanting to alert Husband to the presence of fish and banana in the same dish, for the taste test I made him close his eyes while I ladled a dollop of the salad into his mouth.  I recorded his impressions, which are transcribed below:

"Why would you mix all those flavors and textures together?"

"Can I have another bite?"

"Are there potatoes in that?"

"It's so confusing! Is there tuna in this? Chicken?"

(I then showed him page 8 of the book and told him that the recipe was on that page.)

For my money, it's awfully reminiscent of good old American tuna salad.  In fact, it tastes almost exactly like tuna salad, if tuna salad had bananas in it.  If I make it ever again, I'll just go ahead and use tuna, to avoid the hassle of picking through the salmon.  I honestly can't even distinguish the pineapple taste, so if you're tempted to try this at home, you might up the amount to give it more of a Polynesian exoticism. 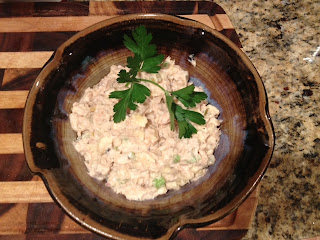