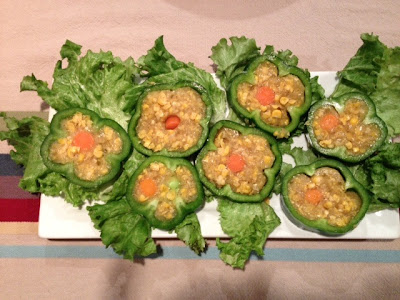 Like the beloved Guess What Salad, this sort of ended up looking like vomit encased in gelatin.  But, unlike the Guess What Salad, the main ingredient here is cream corn, which already looks a lot like vomit on its own, so one could reasonably expect that the gelled version would, too.  And yet, Opal Pruitt of Buda, Illinois thought it wise to go ahead with this recipe.

Blend corn, onion, salt, pepper and sugar. Soften gelatin in water; dissolve over hot water. Add to corn mixture. Put a piece of carrot in each hollowed out pepper and fill with corn mixture. Set peppers in muffin pan to steady them while chilling. Slice and serve on salad greens with dressing.

Two challenges right off the bat - I've never worked with unflavored gelatin, and what the hay is a no. 2 can?

The second question was quickly answered by my crack Googling skills - and here's a handy chart of old-timety can size equivalents for easy reference. Turns out no. 2 is about 20 ounces. Now, I'm no rocket scientist, but if my 7th-grade math skills are serving me correctly, using two no. 2 cans would result in about five cups of cream corn slop.  Having recently dumped a gallon of unused glop down the drain, I decided off the bat to halve the recipe, since it's just Husband and me.

The closest I could get to a 20-ounce can these days was 14 3/4 ounces, so I reckoned that close enough to 20 for my purposes.

Now, the unflavored gelatin.  It's a pretty intimidating process, like conducting a little science experiment in your very own kitchen!  First, you sprinkle the gelatin granules on top of cold water (or whatever liquid flavor base you might be using.)  After a few moments it turns into something resembling tile caulk.  Then, you have to heat it up without adding more liquid, and stir until the gel is all dissolved.  (I set the measuring cup in a pan of boiling potatoes which I was using for another recipe,  Dingle Fish Pie, which is delicious and thus not suitable for this blog.)

Okay, now that I read over that last paragraph, it doesn't sound so difficult or amazing.  But it is a lot less convenient than instant-mix Jell-O, plus at this point I was about two cocktails in.

I also wasn't exactly sure of the benefit of grating onion vs. just dicing it really fine, so I did the latter.

The trickiest part of the entire operation was balancing the cooked carrot in the middle of the hollowed-out green pepper while pouring in the corn slop.  Then trying to ensure that it stayed erect (heh heh) during the chilling process, which took quite a while. Overnight, in fact. (You can see in the above photo how one of the carrots, meant to represent the pistil, got whopper jawed.)

(Incidentally, I'm really impressed with myself that I pulled the word pistil out of my ass just now.  I'm not even sure if it's the right word, but one of my biologist cousins will set me straight if not.)

What we thought:  The gelled corn slop was okay, but not really flavorful enough to cover for the green pepper taste, which sort of overwhelmed.  Also, the gel doesn't really adhere to the green pepper very well...once sliced, one would need to serve right away, as the gelatin tends to slip out of its protective pepper-frame.

I really didn't like this one bit, owing in large part to my dislike for raw green peppers.  Which biases me, and what I think is not germaine anyway.  I might have liked it better had I followed the suggestion to serve "with dressing" but I couldn't imagine what would go with it. Ranch?

Husband....loved it. It might be his favorite thing I've made yet.  Go figure. 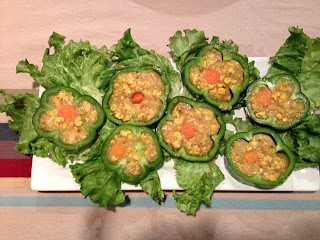