I wasn't going to post again so soon, but I'm bored, and hungry, and hydrated enough to prepare for the sudden ingestion of a week's worth of sodium.

I have dim childhood memories of eating what was always referred to as "Aunt Sue's Chicken", as well as a careworn, hand-written recipe in a lovely cursive script, titled "Aunt Sue's Chicken", and so I naturally assumed that the titular "Aunt Sue" was my own Aunt Sue, who was my grandmother's sister and lived with her for several years during my childhood. 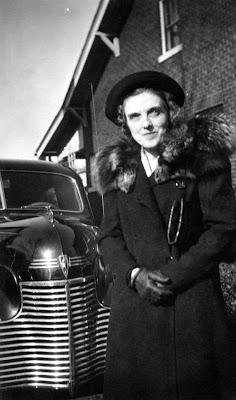 BUT. Finally getting up the energy to read the recipe, I find it signed by "Sue Hansell", not my Aunt Sue and, in fact, not any Sue I ever heard of.

My crack Googling skills tell me not only that everyone apparently has an Aunt Sue that makes chicken, but also that this recipe, which combines chicken, dried beef, bacon, and mushroom soup, is not unique at all, but is apparently, as the kids would say, "a thing".

Nonetheless, here is the recipe, transcribed from the handwritten original: 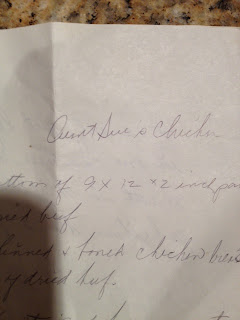 Place 1/2 strip of bacon on top of each piece.

Mix together 1 cup of sour cream and one can of mushroom soup. Spread on top of chicken.

Bake uncovered at 225 degrees for 3 hours. I serve with minute rice and green peas and biscuits or rolls. I usually put light meat in one casserole and dark meat in the other. So use whichever kind of chicken.

Ingredients bought for this recipe: All of the above

With no measurement for the chicken or dried beef, I just used my best guesses. I bought a package of skinless, boneless chicken breasts (though Aunt Sue contradicts herself later in the recipe, I suppose I could've used "whichever kind of chicken") and 4 packages of Buddig pressed beef (I only used 2, so be thrifty!) 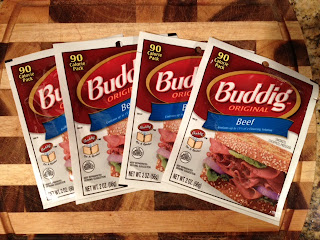 In a nod to the modern healthy lifestyle, I bought fat-free sour cream and a can of mushroom soup with a "healthy request" sticker on the front, though I don't know that it's any different from the regular mushroom soup. 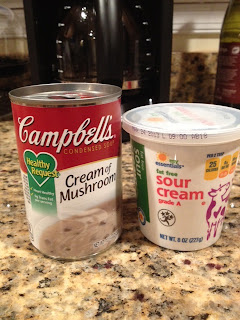 FYI, combining 1 cup of sour cream with 1 can of mushroom soup mysteriously results in about a gallon and a half of gelatinous goop, so you'll have plenty to go around.

I was skeptical about the low temp/3 hour cook time, but followed the instructions dutifully. Also following the instructions to the letter, I served the dish alongside rice and peas, and crescent rolls. 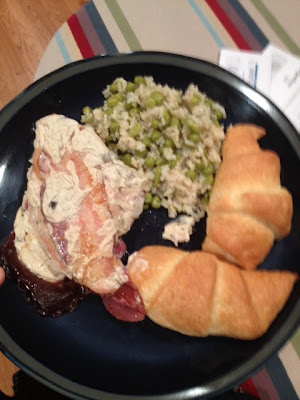 What we thought: I assumed that the low and slow cooking, along with the protective layers of beef and bacon, would result in a mouthwateringly moist piece of chicken, and indeed Husband proclaimed his piece to be so.  Mine, however, was as dry and chewy as chicken breast is wont to be.

I'm not sure of the purpose of the dried beef, other than to add salt.  It didn't add much flavor to the chicken, or if it did it was overpowered by the bacon. Which is not a bad thing.

The mushroom soup - well, I think we can all agree that you could glop a ladle full of mushroom soup onto a pile of horse manure and make it palatable.

But all those good things mixed into one dish? Meh.  Lots of textures, not enough individual flavors. I'd give this one a pass, ladies, unless you're trying to weasel out of ever having to host another bridge club luncheon.