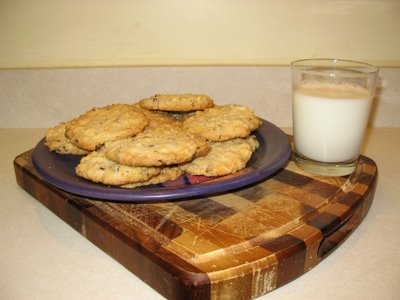 Were you ever really snacky (for the sake of argument, and to better connect with my presumed audience, let's just say you were stoned) and went to the kitchen to get something to eat, and there were presented with the age-old dilemma of exactly what to eat? I mean, do you go for the cookies, or the potato chips?

Thanks to the wonders of modern cookery, you no longer have to be confronted with this bothersome decision-making.

Because you can have BOTH.

I was flipping through the "Desserts" volume of Favorite Recipes of America, when out fell an ephemeraphile's delight: a pamphlet entitled Special Recipe Collection from the Ladies of the 5th Division Commandery. (You can learn all about the Grand Commandery Knights Templar by clicking here. Be sure you have your sound turned up real loud.)

Not only was it filled with gastronomical wonders, many of which I'll be featuring on this site in weeks to come, but the pamphlet itself was stuffed full of loose index cards with handwritten recipes of treats I dimly remember from my youth, including Special K Fruit Cookies, Lebkuchen, and last week's "Aunt Sue's Chicken".

Also included was this gem, "Potatoe Chip Cookies", which I remember well. Chiefly because:

- improperly crushed potato chips will cause severe gum lacerations, which will immediately have salt rubbed in them, and;

- My grandmother, Mrs. White, would cheerfully urge her obese grandchildren to eat all they wanted, as "there's not much sugar in them."

The recipe seems to have come from the kitchen of "Helen", who didn't know how to spell potato. I'm assuming this would be Mrs. White's friend Helen Rice, who used to don a plastic grass skirt at otherwise-respectable society functions and do a hula dance while lip-synching to "We Are Going to A Huki-lau". 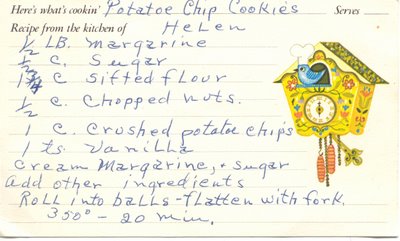 Ingedients bought for this recipe: NONE!

Ingredients already on hand: I used pre-sifted flour, which seems like cheating somehow, but there you have it.

I used pecans for the nuts, though I suppose any nut would do, I even considered peanuts. The pecans were pre-chopped. I really got off easy this week.

I used Ruffles ridged potato chips - I'm thinking this part is glaringly unhistorical, as I'm sure my grandmother would have used flat, greasy potato chips that were delivered to her house in a tin can. But I'm lazy, and it's what I had on hand.

I used butter instead of margarine, again because it's what I had on hand. It seems more natural, somehow. Plus, butter creamed with sugar is, I'm quite certain, the best smell on the Earth. Ever.

I baked them a little longer than suggested, about 25 minutes, because they weren't browned yet at 20.

What we thought: Again this time, the rules were broken by Husband knowing what I was making ahead of time. He has been eating the cookies for about three days now without saying much, until this morning, when he said "These cookies aren't really very good." And then kept eating. I think he was just saying it so I'd have something to write here.

They're not bad, slightly reminiscent of a pecan sandie, owing of course to the fact that I used pecans. The cookies are VERY crumbly, you almost have to eat them standing over the sink or the trash pail. They certainly wouldn't stand up to a good dunking in milk. If I ever make them again, I may try and come up with a clever way to make them doughier so they hold together better. And some orange zest wouldn't hurt either. Maybe a Hershey's kiss plopped in the middle of each cookie. And some frosting. 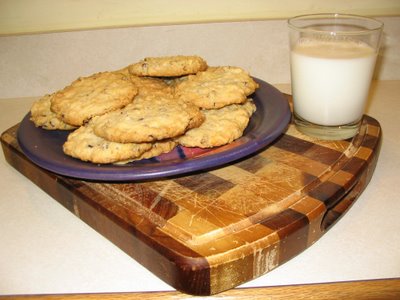 Our Rating: One Screaming Husband!