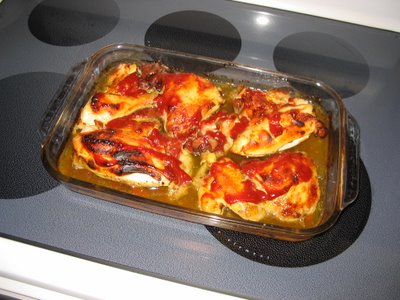 This recipe, otherwise known as "I'm too fat and lazy to make you a real Sunday dinner", is the sole reason I rescued this set of cookbooks from the trash bin. I've been dying to try this recipe for about fifteen years but have never had a reason until now.

Plus, my small rural grocery apparently doesn't stock unflavored gelatin. So I promise more congealed salads next week when I get to the big city.

Place chicken in a deep skillet or casserole dish. Pour salt, catsup and Coke over chicken. Bake at 300 degrees for 1 hour to 1 hour and 30 minutes.

I started out thinking that Mrs. Willard Williams must have secretly despised her family, or been severely handicapped and unable to cook. Then I realized she was from Mississippi, in which case she had probably been raised with any number of innovative uses for Coca-Cola, including using it as a poultry marinade.

1 fryer (already cut up, with giblets)
Against my own rules, husband knew about this recipe all day. And he scolded me for buying an already-cut fryer.

Since the main dish was so easy to assemble, I decided to make a whole meal of dishes which would signify that the chef was too fat and lazy to make anything nice. Thus:

Husband also wanted in on the action, and decided to make home-made macaroni and cheese, which I pooh-poohed as being too much love and attention for a fat and lazy person to lavish on his or her family. He refused to follow my suggestion to white-trash the recipe up a little by using Velveeta or, preferably, Cheez Whiz. But he did relent and top the casserole with crumbled Ritz crackers.

Preheat oven to 350 degrees. Cook macaroni according to package directions. Meanwhile, for cheese sauce, cook onion in butter or margarine till tender but not brown. Stir in flour and pepper. Add milk all at once. Cook and stir till slightly thickened and bubbly. Add shredded cheese, stir till melted. Stir macaroni into cheese sauce. Transfer to a 1-quart casserole. Bake, uncovered, in a 350 degree oven for 25 to 30 minutes or till bubbly. During the last five minutes of baking, arrange crumbled Ritz crackers atop macaroni. Let stand 10 minutes. Makes 4 servings.

Unbeknownst to me, Husband turned up the heat on the chicken halfway through, to accommodate the macaroni, and because he was worried that the Coca-Cola sauce wasn't bubbling. It seems to have worked out fine.

What we thought: The chicken was remarkably moist and tender, owing we assume to the Coca-Cola.  When preparing the recipe, I had thought that the ketchup-Coke combination was meant to approximate Barbecue sauce, but the Coke seems to have acted solely as a moistening agent, and not imparted much flavor to the dish at all. If I ever am lazy enough to make something like it again, I may just go ahead and use Barbecue sauce, and leave the Coke to do it's moistening work (though I'm wondering if any carbonated beverage would do. The Coke brought on a night full of troubled dreams involving me living in a flophouse with 1940's actress Teresa Wright. If it were my grandmother's house back in the day, there would have been no Coke in the house - "Uncle Doc always said it would rot your stomach!" - and we would have had to make do with 7-UP. Which might be awesome.)

The macaroni was the star of the evening, I highly recommend it, though it's certainly more effort than your average negligent housewife would be willing to expend. 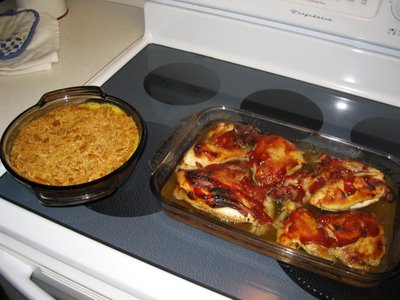