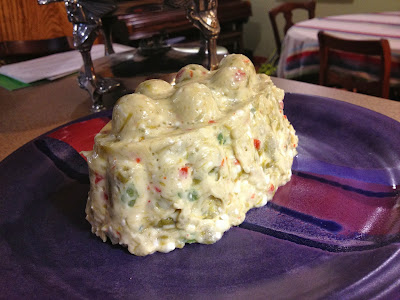 After my last disastrous adventure with canned asparagus, I probably shouldn't have wasted my time with this, but...well, the whole point is to make Dr. Husband retch, is it not?  Plus, I've recently received a lovely gift from a former student of the Better Homes and Gardens Salad Book, c.1969, which will feature prominently in the next few installments.

You might find it surprising that, having been raised in a home where fresh asparagus would be on the table even if it cost ten dollars a pound, that I would fail to turn up my nose at the canned variety. But I don't and there it is. I really don't mind it at all. Sometimes I'll just eat it right out of the can - in fact, that's how I prefer it.  Dr. Husband, however, is driven into a Hulk-smash rage, even at the notion that a can of asparagus may have found its way into the house.

Dr. Bobb Science Fun Fact: Does your pee smell funny after eating asparagus? If so, you're in good company - French novelist Marcel Proust famously wrote in 1913 that asparagus "transforms my chamber-pot into a flask of perfume." And one British men's club is said to have put up a sign reading, "During the asparagus season, members are requested not to relieve themselves in the hat stand."

About 22% of the population report a funny urine smell after dining on asparagus, a result of the vegetable's sulfurous amino compounds breaking down.  But wait, there's more!  Turns out,  scientists believe that EVERYONE'S pee is affected - but only 22% of us have the gene that allows us to smell it!

Now, on with the show. Here's the recipe as it appears in print:

Some substitutions here: living as I do in the idyllic countryside, it was impossible to find cream of asparagus soup (if they even still make it anymore), so I used cream of celery.  Also, I couldn't find, and in fact have never seen "cream-style" cottage cheese, so I used small curd.  I'm also not a big fan of the "chill til firm and then add the rest of the ingredients" method.  I've tried it and don't notice much difference in the final product over the "mix everything all at once then go have yourself a cocktail" method, the key being to make sure your gelatin is dissolved correctly at the very beginning of the process.  I'm convinced the two-step process was invented by men to keep women from having time to think for themselves. 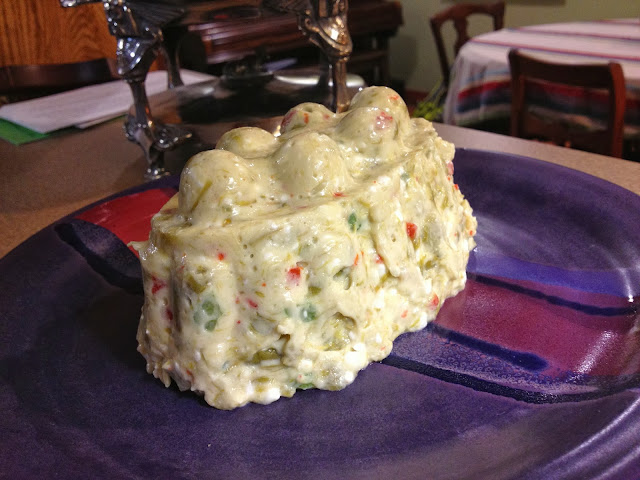