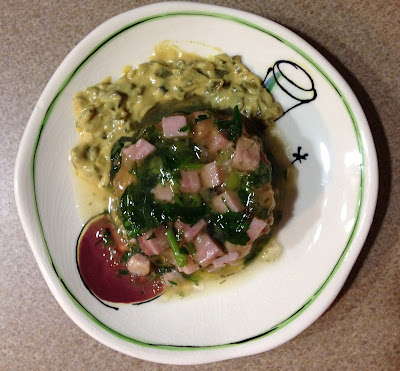 In my never-ending search for disgusting dishes to taunt Dr. Husband with, I come across many excellent internet comrades who share the same fascination with our collective culinary past, including the delightful Vintage Recipe Cards. You should go there right away, as soon as you're done here, if you know what's good for you.

I know the above photo might most closely resemble something you'd step in while going for a midnight pee, after having fed your dog bacon grease, spinach, roquefort cheese, and baby food, but it is in fact a recipe with a decent pedigree. In fact, having initially forgotten where I stumbled upon it, my crack Googling skills led me to all manner of recipes with high-falutin' names like Jambon Persillé and Ham Hock Terrine. Though a major feature of the dish is parsley, which is a taste and texture that disgusts even my refined palate, the other primary ingredients - booze and meat - persuaded me to give it a whirl.

The recipe, as it appears in the original Family Recipe Card ™ Series:
2 cups diced ham, trimmed of all fat
1/2 cup parsley, chopped

Preparation:
1. The ham can be cubed if larger pieces are desired. Add green onions, if used, to ham.
2. Heat the broth, wine, pepper, and tarragon.
3. Add ham mixture and simmer for a few minutes.
4. Reserve broth. Mix parsley and ham together. Dish the ham into 4 individual serving cups
5. Soften gelatin in small amount of water. Stir into broth, making sure it dissolves. Cool slightly until syrupy.
6. Pour equal amounts of broth over each ramekin. Cover and chill thoroughly.
7. Unmold onto lettuce. Serve with mustard sauce.
This seemed to take an awfully long time to go together, even with the cheat of using pre-cubed ham. And from my own taste, I'll tell you not to bother with the mustard sauce. It's too overpowering. I tried a little bit of this the next day, with a dab of mayonnaise, and it was much improved.  (Of course, I have been known to eat ham salad right out of the tub, so I may be biased. Still.)
Dr. Husband's tasting was not as traumatic as I'd feared: