Forgive the delay in getting this up, but I've been so distraught over the events of Thanksgiving - namely, making a recipe of my own creation, which I've made before, and when made before was universally beloved and admired. But this time...well, something went wrong, I don't know exactly what.

First, though, a taste (no pun intended) of something that never goes wrong, Mother's Microwave Liver Pate (no accent on the e, as in my family, pate is pronounced to rhyme with eight.) Here's Dr. Husband and Mother with the instructions:
In case you missed anything, here's the recipe:
2 lbs. chicken livers
a lot of green onions
a lot of garlic
2 tblsp. half and half
2 tblsp. dry sherry
Combine chicken livers, green onions, and garlic. Cook on defrost setting in microwave until livers are done. In blender, add liver mixture, half and half, and sherry. Blend until smooth. 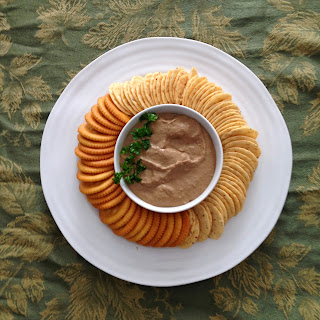 A Jewish Thanksgiving guest declared that it was nothing like traditional chopped liver, but who cares? Once tasted, no one can stop eating it. Plus Mother says it's delicious and DON'T QUESTION HER.

Now then, for my Pumpkin Mold fail. As I said, I've made this before, and it was the highlight of the dessert table.  Here are the ingredients and instructions:

And here's a triumphant picture of the last time I made it: 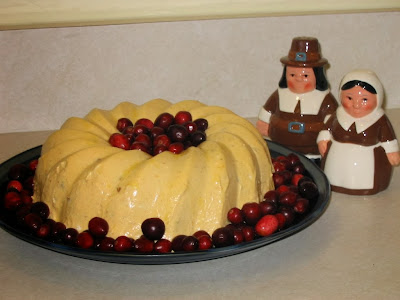 And here's the reaction of an unsuspecting Thanksgiving dinner guest, tasting what I made using the exact same recipe. He gives it a 3 rating, but I think he was trying to be nice. I mean, if the first bite is awful, it's pretty much a failure, right?
That's all for this time, remember that the 12 days of Kitschmas start on December 13!

Oh but hey! If you're in the Carolina Research Triangle area, come out and hear me sing next weekend with Voices of Chapel Hill!