The First Day of Kitschmas: Spaghetti-O-Ho-Hos! 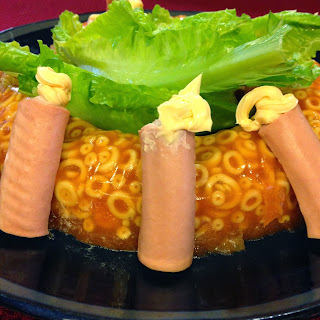 If you've spent any time on Pinterest (and you know you have, ladies...I myself have not, as it's a lady thing) you've undoubtedly come across the following picture 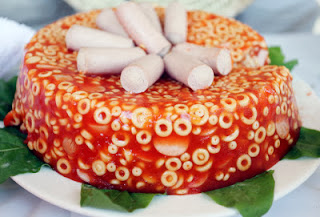 which has been sent to me about a billion times, usually with the subject line "Please Dr. Bobb won't you make this".

Well, try as I might've, I could find plenty of examples of the picture, but no recipe attached.  My best lead suggested that the recipe could be found in 'White Trash Cooking' by Ernest Matthew Mickler, but tracking down a copy of said book proved futile. So I had to make up the recipe on my own.

I basically just made a standard aspic recipe, using a can of Spaghetti-O's instead of tomato juice. Now, cold Spaghetti-O's right out of the can were a beloved staple of my teenage years, so I assumed the mold would turn out to be something like that, only Jell-O-ier.

Sadly, it was not the case. I thought that the Spaghetti-O's themselves would provide enough flavor to counterbalance the blandness of the plain gelatin. But maybe I should have erred on the side of extravagance and used lemon Jell-O, or put some salt and sugar and vinegar in the mix, or something.

Here's what I did, in a nutshell:

In saucepan, sprinkle unflavored gelatin over 1/4 cup cold water; let stand 1 minute. Over low heat,  stir until gelatin is completely dissolved, about 5 minutes. Remove from heat; stir in Spaghetti-Os.
Pour into 5 1/2cup ring mold or bowl; chill until firm, about 4 hours. To serve, unmold and if desired, fill with your favorite salad greens, or cut-up fresh vegetables. Arrange Vienna sausages around outside of ring to simulate candles; add spray cheese for "flames".

Dr. Husband, it turns out, is not a fan of Spaghetti-Os in any form. So there's that. Not that I blame him, as it really wasn't very good (the mold, that is. But I can highly recommend Vienna sausages doused with spray cheese.) Here's the assembly process. And stay tuned for the song at the end!