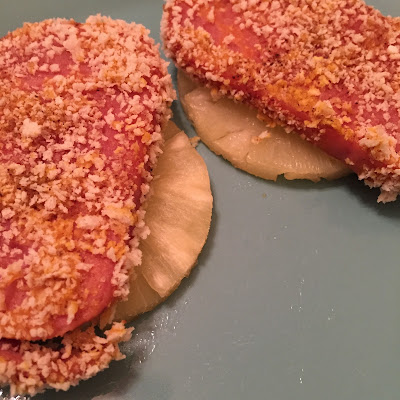 Faithful follower and old pal Bryce has sent me a priceless treasure - two binders of meticulously cut out recipes from newspapers and magazines, found in his grandmother-in-law's attic. Just the sort of thing I can put to good use, in case you yourself happen to come across something of it's like.  In the meantime, you can show your appreciation to Bryce by picking up his CD, or stocking up on some or all of his children's books for the holidays!

So, on to "Crusty SPAM Bake".  Dr. Husband is a well-known hater of SPAM, so I chose an evening when he was away at work to try it out. I'm not so averse - there's really nothing like a slab of potted meat with Miracle Whip in between a couple of slices of white bread, after all - and not that it was entirely a hard sell, but to be perfectly frank it was the first recipe my eyes landed on when I opened the first binder.

Easy assembly, easy cleanup, and not entirely disgusting. In fact, like most mid-century budget cooking, it kind of tastes like nothing: