Hey everyone!  I'm participating in The Cowboy Cook-Along hosted by our friends over at Recipes 4 Rebels, to commemorate National Cowboy Day!  Head over to their Facebook Page to see all the other participants, and here's my own humble contribution: 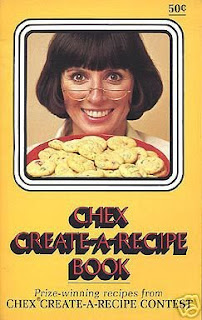 A recent thrift store find was the CHEX® Create-A-Recipe Book (1977) which is filled with "proof that Chex is much more than just a breakfast cereal...not only a great way to start the day but a wonderful way to make good things taste better."

ALL RECIPES IN THIS BOOK HAVE BEEN TESTED AT CHECKERBOARD KITCHENS the frontispiece proudly proclaims, and though I forgot to get a rating from Dr. Husband on this recipe, it's safe to say that it's a "1" screaming husband.

I mostly chose Clam Crunch for the name (I'm a sucker for alliteration) and because clams are something that Dr. Husband has historically not cared for, but this turned out surprisingly well and I would not hesitate to serve these as an appetizer or perhaps as part of a tapas evening. (I've never hosted a tapas evening - but it sounds lovely, doesn't it?)

The proof's in the pudding, so here's what Dr. Husband thought: 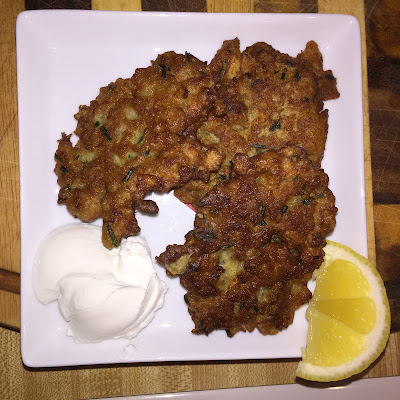 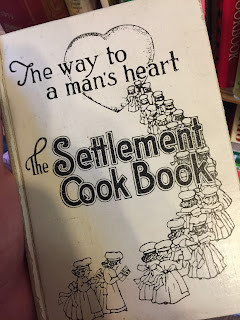 Sardines! Pie!  What better combination could be found for ingratiating yourself into a man's heart?

I'm just delighted with my new thrift store find, The Settlement Cookbook. Not only lots of whacked-out recipes (I can only imagine that sardines were once more popular, or perhaps 1930's housewives were more in touch with their Old World roots), but also lots of advice for new brides like how to do a proper place setting, or what cocktail to serve to the husband's boss. Expect to see lots more from this book!

So, sardines wrapped in pie crust. No hidden ingredients here (the "speck of cayenne" hardly counts).  It turns out just exactly how you would expect. The recipe: 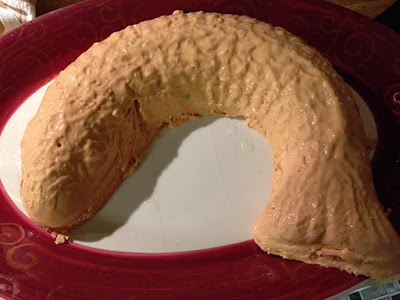 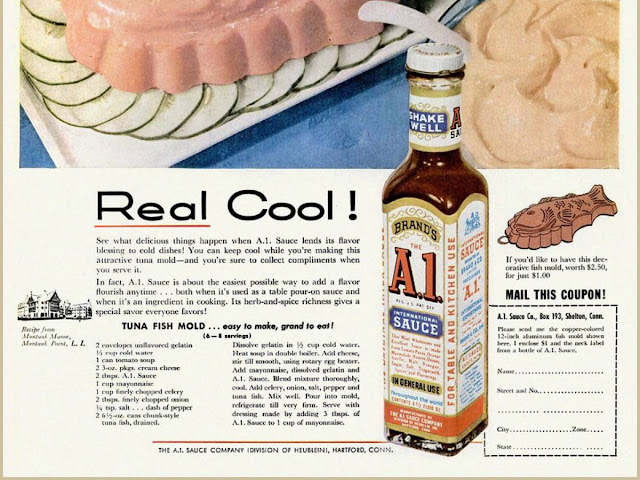 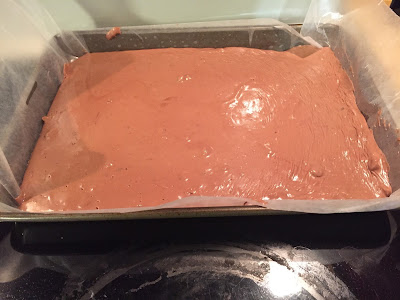 
Fudge!  With beef!  Seems like it was custom made for me to torment Dr. Husband with!

The recipe, sent to me by superfan Spencer, comes from "The Poll-ette Hostess Cookbook", a collection of Montanan Polled Hereford ranchers' wives' favorite recipes. 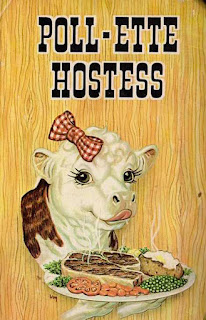 A disclaimer:  Dr. Husband and I have been to Montana many times. It's a lovely place full of gracious people. We have never seen or been offered beef fudge.

Also, try not to think too much about the fact that our bovine cover girl is licking her lips, while serving up a sizzling hot steak. 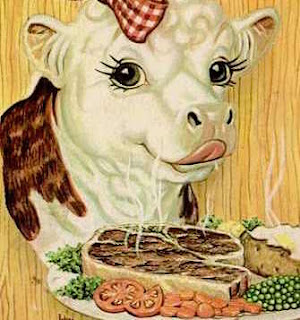 Now, on to the fudge. Here's the recipe it its original form: 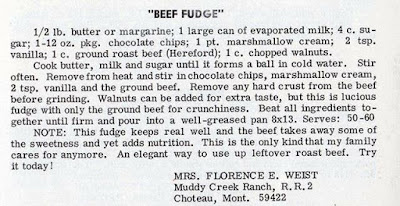 I didn't have any leftover roast beef handy, so I used some lunch meat roast beef.  I also used the optional walnuts. (I'm not exactly sure in what respect roast beef would ever be expected to add "crunchiness".)

Mrs. Weist doesn't mention anything about precise temperatures, but I know from my genetic candy making heritage (if you've been following my other blog, you know that my grandmother was the Candy Queen of Middlepoint, Ohio!) that proper fudge is dependent upon a couple of key temperatures.  To wit: when heating up your sugar base, you should cook to a "soft ball stage" (237 to 239 degrees), then remove from heat, and wait until it cools to between 110 and 120 degrees before stirring in the other ingredients.

I faithfully cooked to temp at the front end, but stirred everything else in before it cooled all the way - the result is a softer fudge that's a little harder to cut and serve, but otherwise delicious.

Yes I said delicious. I'll be damned if I can detect any hint of beef flavor in this fudge. It just tastes like fudge, begging the question of why Mrs. Weist would have ever added beef in the first place, she could have just made fudge and then elegantly used up her leftovers elsewhere.  Unless, of course, she really was dependent upon the fact that the fudge "keeps real well" - maybe she was without refrigeration?

Dr. Husband was gone all day and I had gleeful visions of a horrific tasting session, but as I said, it's delicious. (He was a little put off once he found out what's in it, but...)  I'd suggest if you want to try this, use bacon rather than beef, for a little more crunch AND something to counteract the sweetness triple-whammy of sugar, chocolate, and marshmallow cream.
Our Rating: One Screaming Husband!
(all dishes are rated from one to five Screaming Husbands. One Screaming Husband equals a happy home where all problems are solved during cocktail hour. Five Screaming Husbands signals the beginning of divorce proceedings.)
Posted by Dr. Bobb at 12:42 PM 5 comments: 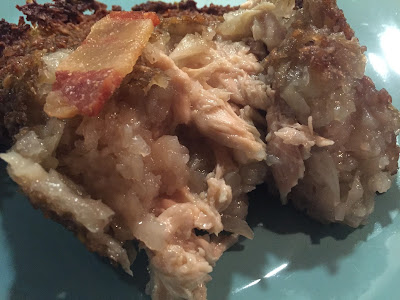