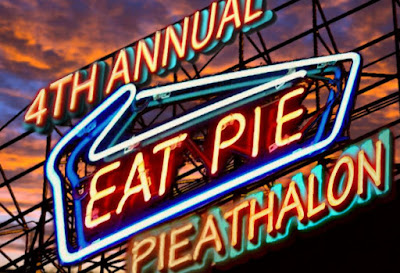 I'm so excited to be participating in this year's Pieathalon, hosted by the winsome Yinzerella over at Dinner is Served 1972 . You hopefully know the setup by now - 12 or so of your favorite food bloggers (that's me!) are tasked with digging up a quirky pie recipe, then the recipes are thrown into a virtual hat and swapped around.

This year, Dr. Husband has taken it upon himself to become a pie expert, relieving of the burdens of ever having to deal with crust in any form.

Unfortunately, I do have to deal with something equally odious - RAISINS. I bear the psychological scars of having been fooled one too many times at the Cineplex, biting down into what I assumed was a salty sweet Goober, only to find out too late that it was a Raisinette. The dreams haunt me still.

So you can imagine my, um, *delight* in being assigned LEMON RAISIN PIE, a little gem from 1950's More Downright Delicious Sun-Maid Raisin Recipes contributed by Bittersweet Susie: 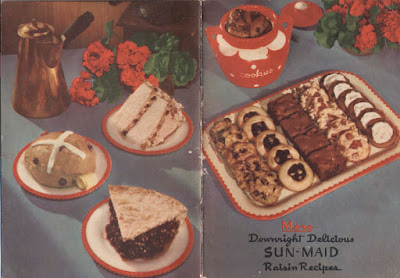 Raisins - A distinctive California Product! - "are a valuable source of concentrated, quick energy food value...rich in natural fruit sugar and body building minerals. They are a splendid food confection for growing children."

What the Sun-Maid marketing team neglected to include was, "Raisins are horrible wherever and whenever they are encountered. They belong in one place and one place only, bread pudding. Also in oatmeal if you're a communist."

So, let's get right down to it, shall we? The recipe as it appears in print: 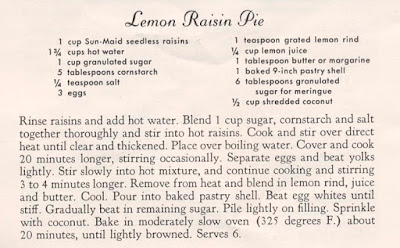 Your first step, of course, is to call Dr. Husband to drop whatever he's doing and come make your crust.  He uses the recipe found on the Nothing In the House Pie Blog. After that, the rest is easy squeezy. Just watch and see if it isn't so!

And be sure to check out all of my comrades-in-arms and their tasty (or not) pies!