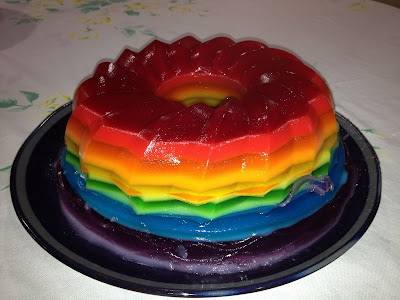 In honor of GLBTQ Pride Month, as well as the forthcoming Supreme Court decisions on Prop 8 and DOMA (as I write, they're still putting it off as long as they possibly can...) I bring you the shimmering delight you see above you, the fabulous Rainbow Jell-O Cake!

Now, as my mother would say, making this cake "ain't for sissies". You will need a good 4 1/2 hours of constant attention, so I'm sorry ladies, it's not the kind of recipe where you can complete a step then go to the other room and watch your stories.  This needs constant tending and attention, so if you're not up for it, don't even start.  That being said, I wouldn't be averse to you sitting in a nearby breakfast nook with a highball and cigarette, thumbing through People magazine while you create your masterpiece.

8-3/4 c Boiling Water7 pkg flavored Gelatin, 1 each of the 6 different colors of the rainbow, plus one extra, either red or purple1-1/4 c Vanilla Yogurt (smooth and creamy works best), or sour cream, or cool whip

The first thing you'll do is line up your colored Jell-O boxes next to five large cups and 1 quart-size bowl or measuring cup. Put each Jell-O color in its own cup, and whichever color you bought two of goes in the quart bowl.  You can probably do whatever you want order-wise, especially if you're doing the highball method, but for authenticity's sake I urge you to do the colors in rainbow order, which you'll all remember is Red-Orange-Yellow-Green-Blue-Purple.  So, if you're starting with red, as I did, then purple will be the color you buy double of.

Into each cup put the Jell-O, and 1 1/4 cups boiling water (2 1/2 cups for the double batch).  Stir each color until the Jell-O is completely dissolved. I suggest a separate stirring implement for each cup, to avoid cross-contamination. You should end with an artful display of colorful liquids like so: 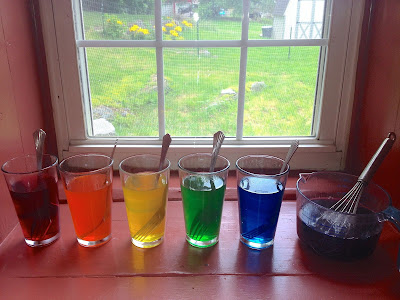 Lightly spray a 10-cup Bundt pan with cooking spray, wipe out, and off we go!

Beginning with your first color, pour 3/4 cups of the dissolved Jell-O into the pan.  Chill in the fridge for about 15 minutes, until the Jell-O is set but not firm (it should slightly stick to your fingers when you touch it. So keep your hands clean.)

While the first layer is chilling, stir 2 tablespoons of your binding agent (yogurt, cool whip, whatever; I used vanilla yogurt) into the remaining liquid mixture.  You should arrive at a Play Doh-hued mixture like thus:
Pour the creamy mixture over the set layer. You'll want to either spoon it in, or pour it slowly over the back of a spoon, to avoid breaking the layer below. I'll demonstrate!


Chill the creamy layer, again until firm but not set.  I can't emphasize this enough. If you wait too long, your layers won't bind.

Repeat the above steps for each successive color. You'll find that each layer takes less and less time to firm up, which is why you must pay careful attention!

When done, you should have twelve alternating clear and creamy layers.  Refrigerate overnight. Sorry, this is non-negotiable, you can't expect to whip this up in the morning for your evening Pride march.

The unmolding will be a harrowing experience, I suggest having a helper on standby.  I set the bundt pan on a plate to chill, then when it came time to unmold, set the serving plate on top, then had Husband help me to flip it.  You'll also want to give your mold a ten-second swirl in a sink of warm water before unfolding, to loosen it up.

If your heart is true and your intention clear, you too will have a glorious and sickeningly-sweet rainbow cake to impress your next gay gathering (I mean, I'm not saying that the gays have completely co-opted the rainbow - this would also be suitable for children's birthday parties or Noah's Ark-themed Church functions, I suppose.) 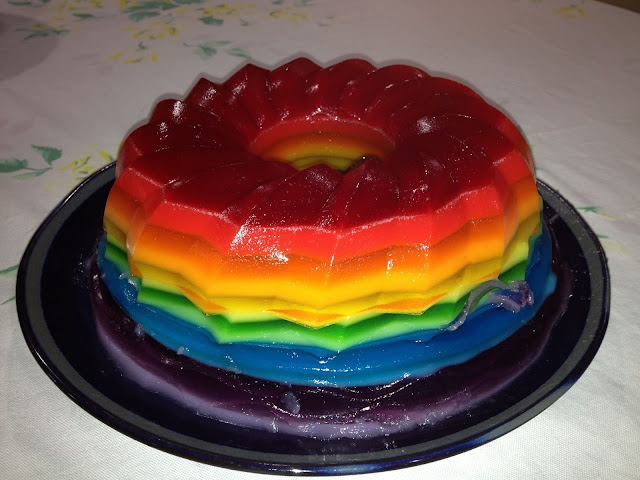 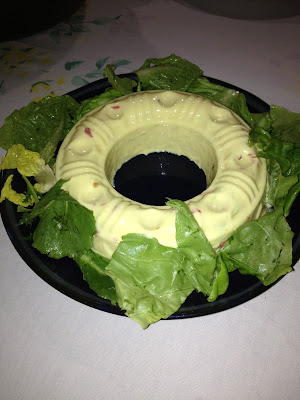 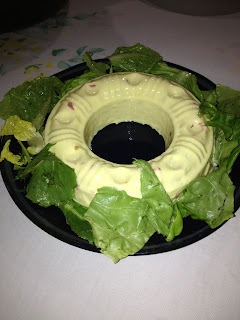