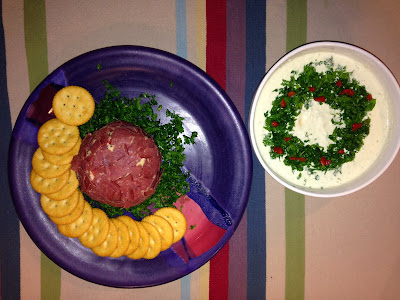 I suppose the first thing you'll notice in the above photo is that there is only one thing that can accurately be described as a cheese ball - though I followed to the letter the directions in the 1974 Southern Living Party Snacks Cookbook, the "Green Christmas Cheese Ball" essentially turned to sludge. Think it's o easy to spoil my party, Southern Living?  WELL THINK AGAIN.

Here are the recipes, as they appear on pages 62 and 63, respectively:

As noted above, the green variety never was a ball, and could not be coaxed into being one. Still delicious, though, so I served it as a dip, topping it with a wreath made of parsley and pimientos. Here's what Dr. Husband thinks!