Ring-Around-The-Tuna
"A beautiful jewel-like entree salad for your luncheon or buffet table!" 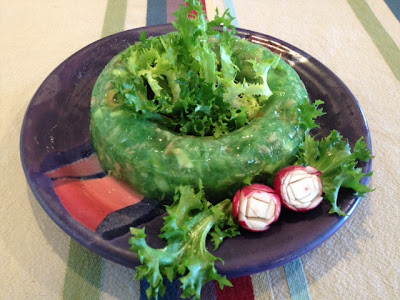 In for a penny, in for a pound they say. So I've been scouring eBay for vintage recipe books (that are in my price range, which limits me quite a bit.)

My first triumph arrived in the mail yesterday, the 1963 edition of "Joys of Jell-O". I literally squealed with delight when I opened the package. 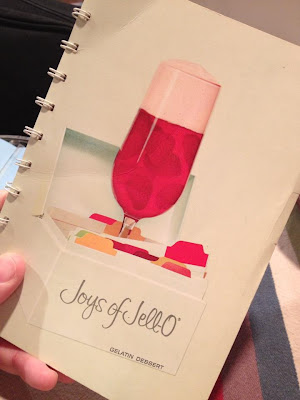 Not only recipes, but so much more - recommended chilling times, tips on un-molding, and even a delightful preface, "The Story of Jell-O...And Why It Grew";

Jell-O Gelatin first grandly shimmered its way into American dining rooms in 1897. Just how many brands in your kitchen go back 65 years? Very few, you can be sure, and fewer still have continued to grow in popularity the way Jell-O Gelatin has each year.

...Jell-O Gelatin's long-time popularity comes from many good things. Its lightness is one - a big one. Jell-O Gelatin is so light it seems to make any meal sit a little lighter. Its fresh fruit taste, so much like the fruit that inspired it, is utterly satisfying. And its easy to fix in all kinds of ways - some we'll wager that have never entered your mind.


Fair enough. Encasing tuna fish in lime Jell-O never would have entered my mind (and this is coming from someone who's already put corned beef in Jell-O.)

But, come on. It's called "Ring-Around-The-Tuna". How could I not. It's like Joys of Jell-O was daring me to make it.

As I've come to find out, one of the major frustrations when making a savory Jell-O dish is trying to balance out the sweetness of the fruit flavoring.  Jell-O in fact did address this problem, briefly, in the 1960's, by developing four savory flavors:  celery, mixed vegetable, seasoned tomato, and italian salad. 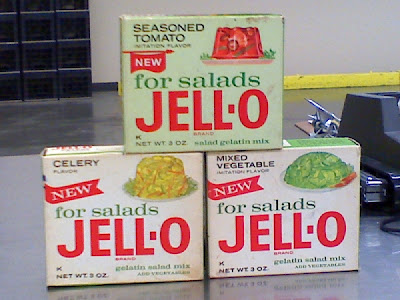 For some reason, the savory flavors weren't so popular, and were discontinued shortly after their introduction. Oddly, I remember a box of tomato flavor Jell-O which sat, unused, in our pantry through most of my childhood.  Though likely to be inedible after 50 years, you can still find unopened boxes of these flavors for sale if you're so inclined.

The more standard method of turning sweet-to-savory is by adding vinegar and grated onion.  In an earlier recipe, I pooh-poohed the idea of grating onion versus fine dicing, but I have finally seen the light; grating produces an onion slush that can mix in and flavor the entire mold, rather than bits of flavor here and there.

Now then, here is the recipe in all its glory:

This goes together fairly quickly, the most time consuming part was grating the onion.  Husband got a peek at the recipe title as I was putting it together and gasped, "Wait, there's not tuna in it, is there?"  Heh.

Now, the officially-approved trick to adding items to Jell-O is to "chill until very thick, not set".  Maybe  judging the point at which Jell-O is very thick but not set was a skill taught in Home Economics classes back in the day, but frankly it caused me a lot of anxiety. I watched it like a mother hen. And I'm still not sure if I chose the right moment to add everything in, but made my best guess.

Whether because of my mixing style or timing, my mold ended up being somewhat cloudier than the photo sample provided in Joys of Jell-O:

I am exceedingly fond of my radish roses, however.

What we thought: This is actually not the most disgusting thing I've ever had in my mouth (no gay jokes, please). You can definitely tell that there's tuna in it, but it's not an overpowering taste.

Husband likes the mix of textures. The most jarring thing for both of us is the uneasy mix between sweet and salty - unlike, say, salted caramel, the two extremes here don't mix quite so well. Nonetheless, husband said "I would almost welcome that on a hot summer's day."

We each tried a second taste with a dollop of mayonnaise on top, and it worked much better at smoothing out the salty-sweet disparity.  A quarter cup or so of mayonnaise mixed in before chilling might not be such a bad idea. Were it still available, I wouldn't be opposed to trying this recipe with celery-flavored Jell-O, or even the discontinued lemon-lime. In fact, lemon might even be a better fruit-flavored choice for this particular recipe, especially with the addition of mayonnaise.

So mock if you will, but there may be something to this gelatin cookery after all. Or maybe I'm just a fat slob who'll eat anything.  Nonetheless, I'll continue tasting so you don't have to!